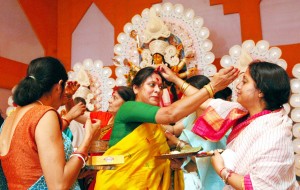 Durga Puja is an annual Hindu festival held in South Asia and this auspicious festival is celebrated mainly in Indian states of West Bengal, Assam, Tripura, Manipur, Odisha, Bihar and Jharkhand. However, the other parts of India also celebrate Durga Puja and especially  Navaratri is celebrated as the major festival in Western India which includes Gujarat, Maharashtra, and Karnataka and also in North India.

Goddess Durga is worshipped with great devotion during Durga puja festival . Among the Hindus, the Hindu Bengali community, celebrates durga puja festival with enthrallment because Durga Puja festival is their most important annual festival  observed in the autumn and due to this festival falls in autumn,it is also known as Sharad utsav .

Mahalaya is observed seven days prior to the Durga Puja. It is believed that Goddess Durga descends from the heavenly adobe and visits on  earth for only four days. Navaratri starts the day after Mahalaya, and it is observed for 9 nights and 10 days . The dates of durga puja is set according to the traditional Hindu calendar and the festival of Durga Puja is celebrated during the fortnight known as Devi Paksha, which starts from Mahalaya and ends on the full moon night of Goddess Lakshmi Puja.

Mahalaya: The festive air of Durga Puja starts from Mahalaya and this auspicious occasion is observed seven days before Durga Puja. It is in this remarkable day  Devipaksha  and countdown to durga puja starts and pitri paksha ends. Devotees of Devi Durga wake up early in the morning of Mahalaya and goes out of their house on the streets for long walk which symolizes a kind of invitation to Devi Durga to descend on earth through the chanting of mantras and singing devotional songs. The pre-dawn and morning hours fills up with the enchanting voice of Birendra Krishna Bhadra, the legendary narrator who beautifully recites the sacred verses and tells the story how Devi Durga descends on earth  and goes on to describe  of the epic battle fought between Maa Durga and buffalo demon Mahisasura . Thus, Durga Puja festival epitomises the victory of Good over Evil.

Durga Sasthi or Maha Sasthi: Durga Sasthi is the most important day of Durga Puja. On this particular day, all arrangements are completed for worshipping Goddess Durga. The ritual of Maha Sasthi includes four different steps – Kalparambho, Bodhan, Amontron, and Adhibas.

Kalparambha : This ritual is performed early in the morning with a promise or oath to conduct Durga Puja follwing  all customs and  rituals. A ghata ( copper pot) filled with water is kept at a corner of Durga mandap for worshipping Durga and Chandi.

Bodhan: It is believed that Gods need an awakening, so  at the time of dusk Bodhan ritual is performed and Goddess Durga is unveiled.

Adhivas and Amantran : After Bodhan, the procedure of invoking Durga in the bel tree is performed and it is known as Adhivas. The rituals of Adhivas is quite difficult to understand. So, Pandits  handle this.

Then comes Amantran when process of inviting Devi durga has been started with a request to accept the  Puja the next day. Then  Devi Durga is worshipped and arati is done.

Durga Ashtami or Maha Ashtami: Durga Ashtami is a day of celebration of Devi Durga’s victory over Mahishasur. In this important day devotees recite the mantras and offer flowers i. e. Known as pushpanjali to Durga Maa and also pray ‘Kola Bow‘ offering chalkumro (a type of pumpkin), banana and cucumber.

Nabami or Maha Nabami: Nabami is the biggest puja of all Duja puja days and it is also the last day of Durga Puja. Sandi Puja is performed between at the end of Ashtami and the beginning of Nabami. Devotees offer food to Goddess Durga and later it is distributed as prasad to everyone and it is called  Nabami Bhog.

Dashami or Vijaya Dashmi: On the day of Dashami, Goddess Durga set off for Kailash with her children. Devotees of Durga immerse the clay idol of Durga in Ganges with a heavy heart. The major event of Vijayadashmi is Sindur Khela (Vermillion game). In this game married women apply vermillion to eath other. Later in the evening when Goddess Durga is immersed friends, families, and relatives greet each other with sweets. The Durga Puja festival is a socio-cultural celebration which Bengalis celebrate without religious inhibitions.

This site uses Akismet to reduce spam. Learn how your comment data is processed.